On the first Sabbath of the New Year, Hampstead Church welcomed the British Union Conference President of the Seventh-day Adventist Church; Pastor Ian Sweeney. He brought to us a study of Jeremiah from Jeremiah 15.

He talked about how he struggled and that despite being chosen by God for a massive undertaking, he himself doubted whether God was really there for him. The children of Israel had steered away from God’s plan, they had forgotten God and how he led them in the past. God wanted to steer this entire nation back towards Him, and Jeremiah was the man he chose to do it. However, despite this, Jeremiah became celibate, friendless, and outcast. Attempts were even made on his life. Things were getting harder and harder, and he doubted whether God was really there for him after all. He questioned God, even accused God, and God responded. God fired him. God told Jeremiah if he was going to represent God, he had to trust God.

Once Jeremiah made that decision, and the commitment that comes with it, he started to see God’s love.

Pastor Sweeney concluded by saying that we are human; we will always have highs and lows. We have feelings and therefore we are vulnerable to the emotions of doubt and distrust. But faith means trusting in God in exactly those moments. God is always there, and if we trust in him, he’ll always get us through it. 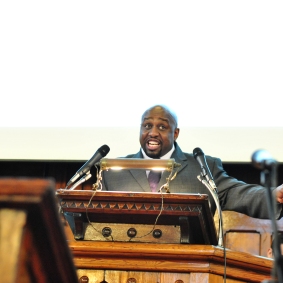